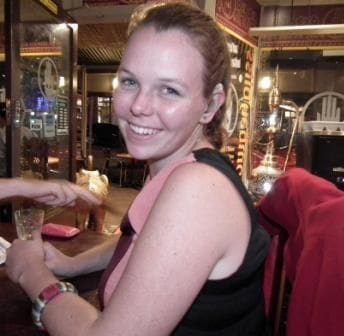 Hi, my name is Chloe. My sign name is Chloe, most people have a sign name to identify them and to know who they are, for example there might be a lot of Chloe’s that are Deaf, so when people ask, oh which Chloe are you talking about? When we use our sign name, they say, oh yeah, I know who she is, or no, I don’t know who she is.

I am 18 years old, and I was born Deaf. I learnt to speak (English) and sign (Auslan - Australian Sign Language) when my parents found out that I was diagnosed Deaf at 2 years old. I am still learning today. I decided to tell my story because I’ve been watching the popular TV show called Glee and it taught me that everyone is different and everyone comes from all different cultures, different perspectives, and different experiences. We all have different passions. I learnt it doesn’t matter what sexuality, race, gender you have, religion we come from, disability or no disability you have, we all have the same thing in common, and we all are human and we live on the same planet. Watching Glee lifts my mood, and I know that I am not alone and that everybody has their own issues. I struggled to communicate with my family because everyone in my family could hear and they expected me to hear everything and they didn’t sign as much, and I would get frustrated and angry.

Hearing people say that talking is so much easier than signing/learning another language, but signing is so much easier for Deaf people, some of us don’t want to talk, because some of us can’t hear, or some of us might get blamed or laughed at because we pronounce the words wrong. I just wanted to fit in and feel normal, and be perfect. But I realised it’s not worth it, and I have good friends who accept me for who I am and just like me for me.

I’ve played netball since I was 8 after a Deaf lady told my mum that I should play, my mum was worried that I wouldn’t hear the referee or the players. The Deaf lady, who told my mum that I should play netball, has two Deaf daughters who play netball, so she said this shouldn’t be a problem for me. So my mum decided to let me play netball, and on my first game, I loved it! So I have been playing ever since. I started as a shooter, but when I got older, I wanted a challenge so I changed my position to defence, and it is a lot of hard work, but I love it! When I was in school, there were other sports, and I didn’t know there were a lot more sports. I got involved in softball (for winter sports), running, cricket, soccer with my best friend who was Deaf too. I also played competitive interschool netball in the summer time. I also asked the teacher if there were other groups that I could join, she said, there is the student council, so I went to the meetings and I got a badge. I also nominated for house captain for my sports team, Hercules (green), and school captain so I had to give a speech in front of the whole school. I was so nervous! I didn’t get school captain, but I got house captain, I was so proud of myself, so I was determined to show everyone that being Deaf is fine, there is nothing wrong with us, we just can’t hear. What’s the worst that can happen?

But there were some people who didn’t understand Deafness, so I was bullied in primary and high school because of my deafness, but I never really let it get to me, it just rolled off my back, because I was used to it, and I was so tired of trying to fit in.

So, I finished year 7, and I was off to high school the next year, it was so different to primary school, it was much bigger, with more students and teachers, but luckily I still had the same friends that I had in primary school so I knew a few people. I did all kinds of subjects, Maths, English, SOSE, Science, HPE (Health & Physical Education), Home Economics, Manual Arts, Music etc. It was all so different, but it was fun to try new experiences. I still played netball near my local area, so I still loved playing sports.

In year 12, I was a prefect, I was surprised that the people in my school chose me to be a prefect, but I didn’t think I deserved it because I had to be a role model while doing assignments, studying, having a social life, alone time, sport, all the other commitments, work, boyfriend, friends, family and my whole life. I graduated from high school in 2011. I finished school with the people that I started with in pre-school.

Let’s say I was hearing, maybe I would have no idea what a Deaf person does, or how they communicate, or I would have seen them around somewhere and thought it was cool they were using their hands to communicate or I would think they were stupid. Some people wish they could hear but we can’t change, we were born this way. We’ll always be like this forever. It’s who we are, and it’s a part of us. Hearing people use their ears to hear, but Deaf people see the world through their eyes, because we can’t rely on our ears. When I try to lip-read and hear people, sometimes I miss words but I’m used to it and I ask people to repeat what they say but they say, oh never mind or it’s not important. My dream is to be an interior designer/shoe designer and to be a teacher of the Deaf children. So that’s my story. I’m proud to be Deaf. Thank you all for listening.